As student directors, we tried to engage in a detailed discourse about waste and the river. We started by reaching out to people who had been associated with the river in some capacity – journalists reporting on the Mithi, water conservation activists, citizens, and people who had childhood memories around the river that cannot be imagined in the contemporary urban terrain in the city. Some of the debates that we’ve tried to highlight are dumping of waste in the river by citizens, the role of the BMC, and MMRDA in managing waste, the invisibility of the river in people’s imagination as opposed to its presence as a dumping ground. We also discussed issues like citizen responsibility, citizens ownership towards the river versus the government’s responsibility towards its water resource. We have tried to incorporate diverse points of views of the activist, the citizen, the government across a diverse spectrum of people. The film was unable to talk about certain legal issues, and certain technical aspects of biodiversity conservation.

Trailer: Mithi Si
Directors’ Statement: These Women in the Hills

The questions of safety and acceptability of many of the waste management practices especially those that surround around solid waste management have become a serious concern when viewed from the public health point of view. Hence, when we were asked to do a film on the theme ‘waste’, we had in mind a film that would attempt to deconstruct paradigms of health in relation to waste and its related activities.

An ever increasing consumer market with its inherent industrialisation and urbanisation leads to landfills becoming a prominent characteristics of any city albeit one that is tried hard to be ignored or hidden within the imagination of the city. We wanted our film to focus on the section of the society that is most closely linked to the waste management practices—specifically in the dumping yards—yet kept afar from the discourses that surround waste management, health and development practices. It was only when the city turned black due to the fire breakout during March, 2016 did anyone started talking about health hazards related to dumping grounds. This is what prompted us to take up the health and related hazards that waste collectors face in the Deonar dumping ground.

Through interviews of waste workers within M (East) and L Ward in the Govandi and Kurla areas of Mumbai, this film attempts to explore the correlation between the city and the dump yard and health and the politics that govern waste related practices. While we were initially planning on structuring the film with a personal narrative, the waste collectors were reluctant in letting us shoot in their homes.

While exploring how to construct our narrative around health, waste and ideas of purity and pollution within different classes of individuals, we were aware of our own class positions and the ethical problems that surround our location. We have tried our best to reflect this ethical dilemma in our film ‘These Women in the Hills’ through the inclusion of multiple perspectives arising out of different power dynamics. It was particularly difficult to get any shots of the Deonar dumping ground as accessibility to the ground had become almost impossible owing to the strict regulations brought in place following the fire in March, 2016. Despite this, we anticipate that our sole motive of being able to bring out the hypocrisies within our very own understanding of waste and health practices has found its voice through our film.

We hope that our film helps shed light on the larger issues that arise out of creation, sustenance as well as closure of dumping grounds and the need to urgently address the problems of those whose livelihood directly depends on it.

Trailer: These Women in the Hills
Directors’ Note: Like Dust We Rise 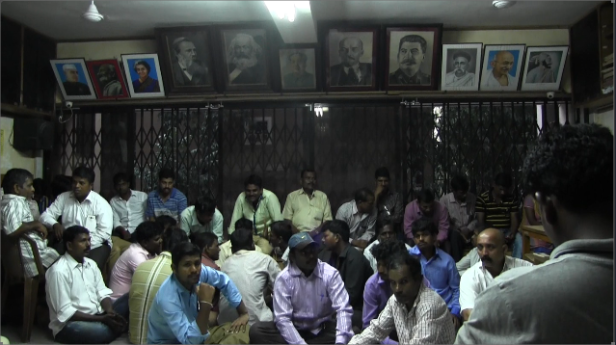 Like Dust We Rise is a cinematic endeavour born out of disturbing findings during the course of our fieldwork. Through Kachra Vahatuk Shramik Sangh we met workers who have been fighting for their legal right for decades, while keeping the city we live in clean. It became a collective goal, for our team, to bring into the public domain the exploitation and discrimination of BMC workers.

In the Wasteline 2016 series produced by the School of Media and Cultural Studies, we contribute by initiating a discourse on the health and safety of those very personnel who make it possible for us to stay healthy and safe. It is through very personal stories of mishaps, accidents and contracting of diseases that the narrative proceeds to explore the current condition of workers in BMC. 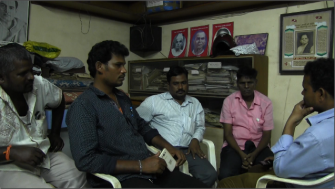 As four urban, considerably privileged, filmmakers we struggled to locate ourself in the discourse we attempt to initiate. We are grateful to all the BMC workers who invested their time in us, while their struggle for basic rights goes on. We named the film thus, for we found a parallel to their strength and determination in Maya Angelou’s Still I Rise.

“You may write me down in history

With your bitter, twisted lies,

You may tread me in the very dirt

Trailer: Like Dust We Rise
Director’s Note: Wo Dhuan

Situated right next to the Tata Institute of Social Sciences, Mankhurd or Annabhau Sathe Nagar is an area which might be beyond some of ours imagination. But that’s the thing about Mumbai, right next to a fancy high rise, there’s a slum. And this probably adds to the charm of the city, which is for all.

As a new comer into the city, we were slowly getting used to the topography of the city. But Sathe Nagar was different. What makes this place and its residents different is the inhumane condition they are exposed to. Remember the time when the entire Mumbai was clogged with smog and smell from the fire of the Dumping ground? Remember how the residents of Chembur took out a rally complaining about how inhumane it is to have such an unregulated dumping ground and how it is affecting the air quality? Well, Sathe Nagar is prone to what Mumbai faced for a few weeks, all round the year.

Our impression of our first visit to the area was a very nerve wreaking one. Most of us came from less densely populated place and Sathe Nagar looked very claustrophobic to us. With heaps of garbage around and the un-breathable air, we were muffled as to how this place qualified as a residential area. It wasn’t about the fact that it’s a slum, but the dirt and unhygienic surrounding makes it an imaginable habitat.

Our first visit as a team to the area was on a Sunday, we us entering the locality via the road right in front of the Medical incinerator plant. As we walked by, we could see residents clogged in the narrow lanes, trying to fill water with pipes ranging meters long. With very less space available to each resident and with unmanaged waste scattered all around, one could not imagine the space the residents are living in.

We needed to learn about the area, we needed to know this area even more. What brought us to Sathe Nagar was the medical waste plant, the land mark we just talked about. Secondary research brought into light that this plant has been in a debate due to its close physical proximity to a residential area. There were reports about people complaining about the plant being a cause of health hazard for everyone residing around it. Moreover, there were allegations that there was a flaw within the functioning of the plan, as they did not properly treat some waste, which later becomes a big hazard for those working in the plan and also for those residing in the nearby areas. All these forced us to visit the area and when we did, we already wrote about what we felt. Our first in fact strengthened our determination to work in area. There were narratives and stories in the area that needs to be heard and we will do so.

Hence, we started working on the documentary.

Trailer: Wo Dhuan
Director's Note: Why This Cow-laveri Di?

Our examination of the idea of “Waste Lines” was born out of a collective urge to understand how the idea of waste can have varied readings and implications among the citizens of a country. It is this urge which led us to the intense debate surrounding the question of what must be done with the farm animal that is of no use to the poor farmer.

With a lot of help from people across communities, ideological backgrounds and occupations as well as the watchful gaze of our department we managed to put together what is perhaps one more stir in the longstanding effort to make sense of and deconstruct the position of the cow in contemporary India.

Our explorations lead us through unfamiliar and fascinating spaces such as the Gaushalas of Ulhasnagar and the butcher shops in Dharavi. More influential still were the complexities of the people associated with this debate. The polemic nature of the opinions we’ve witnessed has made us realize how important each perspective is irrespective of how valid it is. While we wont deny the existence of weaker moments where we have cribbed and whined about the process, we are happy to state that we are proud and excited to present our work to anyone interested. Not because we believe this is the perfect film, but because with every person watching the film, the dialogue only gets richer and more importantly it continues.

We went out to shoot the work that the bhaandiwaalis do, fascinated by this traditional recycling process that most would not actually consider a form of recycling. Once we arrived at Bodyguard Lane, at the footpath where they live, we realised that our film have evolved into something much deeper. It was no longer a story simply about their work, but about the women themselves, their hardships and struggles. It was difficult to just listen to some of their stories, and, in fact, watch their stories as the documentation process proceeded – in the month that we shot, we saw the crippling impact that unexpected rain had on their livelihood, the way in which the smallest fire in a shack could mean the loss of an entire world for them because they lost their belongings, and their partial eviction over one weekend by the municipal corporation. While working through the NGO Pechaan, which aids and assists several homeless communities across Mumbai, including this one, we learnt that their eviction threat comes from the golf-club through which Bodyguard Lane cuts – a golf club that initially disposed of all of the plastic waste in the area, and is now attempting to dislodge this community from it as well. With no documentation proof of residence that is prior to 1995, the residents are not able to avail of SRA rehabilitation, and an eviction would (will) lead to a loss of their homes, their livelihoods, and a breakup of their community. While we had initially set out with a certain process-driven film in mind, we decided to respect our participants voices and allow them to give shape to the final film. Their voices are those that are clamouring for citizenship and recognition from the city of Mumbai, as individuals whose families have lived here for two generations, and who are an important focal point for certain trade economies. We decided to focus on the question, then, of what, or whom, waste really was to the city of Mumbai.